Passive samplers are devices designed to sample groundwater within a screened interval of a permanent monitoring well without pumping or purging. Several passive sampling devices have been developed, and testing has shown that passive samplers can replace traditional purge-based sampling and low flow purge methods without loss of data quality. The status of the passive sampling technology is provided in this technology status summary. 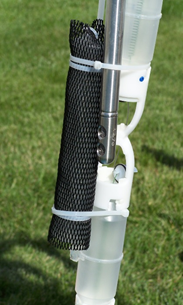 Deployment of the Snap Sampler™

There are three general types of passive samplers for groundwater:

The first commercialized equilibrium sampler was the Polyethylene Diffusion Bag [PDB] sampler (USGS, 2001), and guidance on using PDBs has been available for a decade (

Sorptive samplers are deployed in a monitoring well for a short period of time and rely on sorption of organic compounds to a matrix during the exposure period to accumulate a measurable mass. Time of exposure, temperature, and desorbed mass measured during analysis are used to calculate groundwater contaminant concentrations. These devices can be used for a wide range of organic constituents

Passive grab samplers are pre-deployed devices that are activated in place to directly obtain depth- and time-specific samples from monitoring wells. Passive grab sampling collects a whole water sample, so it can be used for any analyte, subject to volume limitations. All three types of passive samplers have been validated through ESTCP and guidance is available from ITRC (2004, 2007) and ASTM ( Standard D7929-14 - ASTM, 2014). 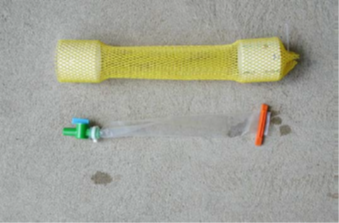 Advantages and Limitations of Passive Samplers

The key advantage of passive samplers is the cost savings from reduced time for sampling and decreased waste generation. However, there can be other important advantages, including: 1) no pumps or power supplies are needed; 2) less on-site time is needed, reducing risks to personnel and inconvenience to site operations; and 3) reduction of data artifacts associated with purging (e.g., excessive drawdown, turbidity).

A common concern during the transition to passive sampling is that the results may not agree entirely with conventional or low-flow purging methods. Inconsistencies can happen and are largely due to flow changes associated with pumping (or not pumping) the well. Occasional differences within individual wells should be expected, but statistical equivalence has been observed in these demonstrations when comparing results over several wells. Individual well differences can be attributed to the depth-specificity of passive samplers, or a limited integration of the sample zone, whereas purging may provide an integrated sample from a larger volume (i.e., the screen length and beyond). As a result, both methods may be internally “accurate”, but each may represent the aquifer slightly differently.

The three passive sampler validation projects funded by ESTCP (ER-200630, ER-200921, and ER-200313) have shown that passive sampling approaches can overcome the limitations of PDB samplers (Table 1). These projects have focused on one grab sampler (the Snap SamplerTM), a broad-range equilibrium sampler (the RCDM sampler), and a sorptive sampler (the GORE® Sorbers, now referred to as AGI Universal Samplers), respectively. These are among the most developed passive samplers, and many of the lessons learned from testing these samplers should also apply to other types of devices and technologies.

The results of these passive sampler demonstration projects are highly encouraging. All three devices tested under ESTCP have shown excellent agreement with traditional low-flow sampling results for almost all of the analytes present at several field sites. In 2007, ITRC concluded that these samplers, as well as others, “provided reliable and accurate data when used appropriately” (ITRC, 2007). These results support that conclusion, and should greatly increase confidence in the use of these passive samplers for LTM.

Precautions that should be followed to ensure accurate data include: 1) use of appropriate samplers for the suite of analytes of concern; 2) avoid problematic monitoring wells (e.g., fouled, bent, long screen >20ft, small diameter [for some methods]); 3) avoid monitoring wells with LNAPL; and 4) recognize potentially problematic analytes (e.g., total Fe). Site-specific evaluations may be desired for unusual site conditions. Such evaluations can be based on comparisons of passive sampler results to historical data, or on paired testing. A conversion evaluation several years after conversion may be useful to understand how the method transition has affected results at individual wells.

The cost savings from converting to passive samplers can be considerable. Savings results largely from the reduced labor and reduced waste compared to traditional purge-based methods. The ESTCP-funded demonstrations suggest that a reduction of 50% in LTM costs is a conservative expectation for grab samplers and equilibrium samplers, while a reduction of at least 30% can be expected when using sorptive samplers. Such savings are significant given that sampling is the dominant cost at MNA sites, and sampling may continue for decades.

Recent SERDP and ESTCP projects have focused on optimizing LTM sampling frequencies, with and without the use of passive samplers. The goal is to increase the efficiency of LTM by defining the monitoring frequencies needed to quantify long-term trends (see below). 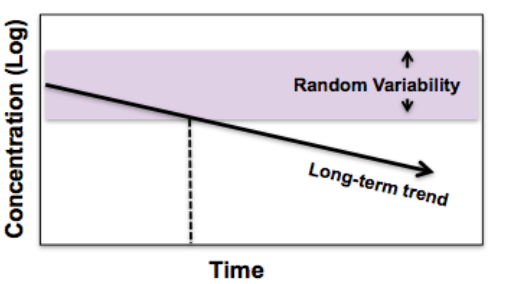 Project ER-1705 demonstrated that changes in concentrations of chlorinated solvents are generally very slow, with attenuation half-lives typically over 5 years. As a result, the variability in typical quarterly or semiannual monitoring programs is often dominated by shorter-term (i.e., seasonal) fluctuations and yields little insight on the longer-term trends (see figure). Annual or even less frequent sampling may be appropriate for some sites where stable groundwater plumes have been demonstrated, losing little information regarding long-term trends while reducing costs considerably. Project ER-201209 has shown that simplified low flow sampling procedures and passive sampling may improve cost structures without compromising data quality. The key point in these recently developed findings is that for some methods (e.g., modified low flow) and equipment (e.g., Snap Samplers), time, equipment, and waste generation can be reduced while maintaining data low relative sampling variability.

Project ER-1704 was designed to better understand the relationships between contaminant concentrations measured in a well using either passive samplers (Snap Samplers) or in situ sensors, and the concentrations present in the surrounding formation. The central hypothesis is that many wells are in fact “naturally purged” due to the natural groundwater flow regime, and that passive sampling (or sensor monitoring) in fact provides the ideal sample - a single, inexpensive, representative sample collected directly from the screened interval. Results indicate many wells can be monitored successfully using passive samplers or sensors, at lower costs than conventional sampling. Further, many wells mix contaminants within the well to the point that the stratification that occurs within the aquifer cannot be measured adequately in many screened monitoring wells.

Passive samplers can provide valid samples for many analytes of concern, under a wide range of conditions. Credible technical and regulatory guidance is now available for using passive samplers, and the results indicate that these devices can greatly reduce monitoring costs, without sacrificing data quality. In addition, a better understanding of the causes for variability in groundwater monitoring results has led to improvements in sampling strategies. At many sites, monitoring events can be less frequent than the typical quarterly to yearly schedules, while still providing the data needed to quantify long-term trends and ensure environmental protection. These improvements promise to further reduce long-term monitoring costs, and therefore overall management costs, especially for sites undergoing MNA.